Hit enter to search or ESC to close

“I commend Simon for his bravery and decision to write this book.”

“A hugely important story and one that must be told.”

“This memoir is a must-read for all of us… I could not put it down.” 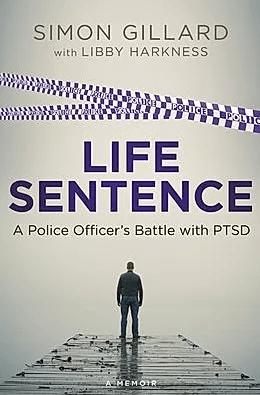 In his bestselling memoir Life Sentence Simon Gillard shares how his boyhood dream of becoming a cop turned into a personal nightmare and the devastating affect this had on him professionally and personally – especially as a son, brother, husband and father.

With unflinching honesty Simon details how he bottled-up his emotions around the personal conflicts, various setbacks, dramatic emergencies and horrific investigations he experienced – partly because he feared that his failure to cope would be viewed as a weakness and jeopardise his career and reputation.

In his book Simon also outlines how his behaviour changed and tracks the deterioration of his mental wellbeing culminating in his diagnosis of complex PTSD, anxiety and depression. And he documents how, after being invalided out of the NSW Police, his mental health issues were then exacerbated by the unscrupulous conduct of insurance companies that initially denied him (like so many of his former colleagues) compensation for the work-related trauma that left him unfit to perform his duty.

Ultimately Simon talks candidly about how he learned to seek and accept help, use grit and communication to flip his mindset and find his purpose – and why he now dedicates his time to helping others for good.

READ AN EXTRACTBUY THE BOOK
Book Simon Gillard for an Event

© All rights reserved by Simon Gillard